The Rise of the pre-IPO Secondary Market

Worldwide, there are reportedly 236 unicorns, or private companies that are valued at over $1 billion each. Collectively, these companies are worth approximately $804 billion. Just over 50% of the world’s unicorn companies are located in the US, and US unicorns comprise 51% of the cumulative valuation of the global unicorn club.

With a large number of investors willing to back these companies, many don’t feel the need to go public to raise funds. Many of these companies also generate high revenue, lessening their interest in going public. Other factors dissuading companies from going public include the cost of doing so. 4-7% of gross proceeds may be required for an IPO. On average, companies incur $1.5 million in recurring costs from going public. In addition, public companies have to deal with new levels of regulations and scrutiny such as public reporting requirements. A company on the public market is also at risk of takeover and of changes in public image.

As reported by Forbes, in 2002, transactions in private equity’s secondary market were worth $3B, just one-thirteenth 2016’s volume. Given the record $49 billion raised in 2016 by secondary funds, vehicles that specialize in investing in this market, it’s highly likely that secondary volume in 2017 will surpass the all-time high of $40B achieved in 2015.

In 2016, Scenic Advisement set the total value of tradable shares among the top private U.S. companies at $35 billion. That is more than three times the $11B assigned to the asset class in 2011. The firm projected a further jump to $38B for 2017.

A Forbes article mentions that in 2017, the average fund changing hands on the secondary market was selling at a 5% discount to net asset value, narrowing from 7% in 2016. Average sales prices in the secondary market have held above 90% of net asset value for four years indicating the change between the low volume, illiquid market of the early 2000’s and today. The article states that only about 28% of private equity funds fail to return at least the investment compared to just 5% of secondary funds.

One issue with companies putting off IPOs is non-liquid equity. Founders or employees of companies hold shares of companies that they cannot sell or benefit from for years, until the company reaches an exit. In terms of employee stock options, US tax rules mandate that unexercised employee stock options expire 10 years from the date they were granted. The Blue-Collar Investor mentions a common misbelief that only 10% of option contracts are exercised. However, that doesn’t mean that 90% of stock options expire worthless. The Chicago Board Options Exchange states that between 55% and 60% of option contracts are closed out prior to expiration, while 30% to 35% of options contracts expire worthless.

Seed investors in startups hope to receive significant returns on their investments when the company reaches an exit. However, until there is an exit, investors can’t generally sell or access their shares. With companies taking increasingly long to reach an IPO, this is a growing problem. This can be an issue especially for smaller investment firms that don’t have enough cash or deals in their portfolio to sustain waits of ten years for an exit. Another issue is dilution, as the more rounds of funding a company goes through, the smaller percentage seed investors generally hold. On the other hand, many of these companies are more valuable than ever, with 16 unicorn startups currently worth $10 billion or more.

Facebook was founded in 2004 and turned down multiple offers from potential buyers before going public in 2012. The company was reportedly in no rush to reach an IPO, but since by 2012 Facebook had crossed the threshold of 500 shareholders, they would have begun to be subject to SEC disclosure rules starting the next year, making an IPO inevitable.

Facebook was reported by Bloomberg to have a $2 billion valuation in 2006, and quickly rose to a valuation of $15 billion in 2007, $24 billion in 2010, and $50 billion in 2011. The following image from TechCrunch illustrates the company’s valuation over the years until their IPO: 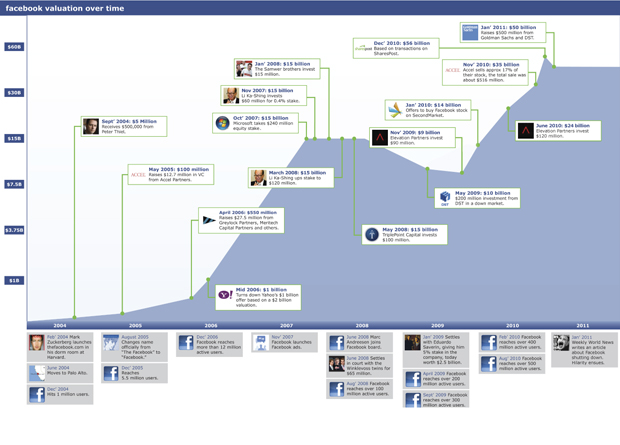 As the company’s value skyrocketed, shareholders had no way to cash in. Facebook employees had been finding private buyers to unload their shares as early as 2007, and when SharesPost launched in 2009, many early employees looked to sell their shares. Class B shares of Facebook traded as high as $44.50/share ($46.30/share after commissions) on SharesPost prior to the IPO.

The number of companies valued at over $1 billion has never been higher. The median amount raised in prior funding for a company undergoing an IPO was $97.9 million in 2016, up from $12.2 million in 1996. Many startups raise billions in funding without going public, such as Uber ($21.1 billion in funding) and Magic Leap ($2.3 billion). Some top-valued unicorns that haven’t yet reached an exit include:

The Rise of Secondary Markets

The secondary market offers a way for startups to keep their shareholding employees happy, especially workers who want to get married, buy a house, or send a child to private school, but are “cash-poor and paper-rich,” said Howard Lee, managing director of Founders Equity Partners, which launched in 2015 to make secondary market investments. In addition, stock options for employees generally expire after 10 years, and early hires may be forced to wait longer than that for their startup to go public.

In terms of secondary market buyers, mutual funds, sovereign wealth funds, family offices and other investors are eager to buy hard-to-access shares of hot startups such as Airbnb or Uber that they might not have access to otherwise.

Even with the rise of pre-IPO secondary markets, there are still some obstacles and liquidity issues. Buyers of shares in pre-IPO companies in the secondary market find themselves with relatively illiquid assets. They must wait for the company to make an exit in order to realize the value of their investment, and secondary shares often come with restrictions and lock up periods for when buyers can sell.

The crypto market may present an opportunity to take the pre-IPO secondary market to a new stage. Using digital tokens, such as PrivatEquity’s PrivatEquity Coin (PEC), may help simplify the process of selling shares in the pre-IPO secondary market. Companies are increasingly issuing and creating platforms to trade “security tokens”, which are crypto coins that enable purchasers to own an asset. Using cryptocurrencies and digital tokens to represent assets with real value, such as precious metals, real estate, or shares in companies, has the potential to significantly change the way people trade and invest.

By using a blockchain token model, secondary marketplaces can enable users to more easily trade assets and enhance the liquidity of their investments. A token model can also minimize transaction costs and can remove geographical constraints by handling processes through blockchain and the internet.

In addition, platforms like PrivatEquity.biz expect to reach new types of investors, combining crypto investors with private equity investors in one platform. By gaining exposure to equity-backed tokens, crypto investors can gain stability at the same time as traditional equity investors gain liquidity. There are also expected to be opportunities to invest in assets other than tech startups, such as sports clubs. In this way, crypto tokens have the potential to improve pre-IPO secondary markets, by adding liquidity, trust, and opportunities for different types of investors to gain stakes in increasingly diverse portfolios.