Does Telegram’s ICO Mark the End of the IPO Era?

Telegram is an instant messaging service whose main selling point is strong encryption, allowing users to chat privately. Secret chats are stored on the device, rather than the cloud and can be set to destruct after a certain time. Telegram’s applications are available for Android, iOS, and PC, and let users send messages and exchange photos, videos, stickers, audio, and files of any type. Russian brothers Nikolai and Pavel Durov, who had previously launched VK, Russia’s most popular social network, launched Telegram in 2013. Since then, Telegram has been somewhat nomadic in an attempt to avoid government influence, with reports saying they were headquartered in Berlin for some time and are currently based in Dubai.

Telegram is raising funds through a multi-round ICO (initial coin offering). The company was previously reported to be raising a total of $1.2 billion through their ICO, but later reports have put the potential total at $2.55 billion. This would be by far the biggest ICO yet. The first round in February 2018 raised $850 million from venture capital funds. 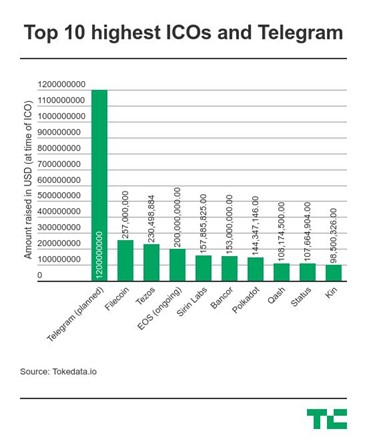 There has been a trend amongst ICOs to offer large discounts in the pre-sale phase to encourage large investors to contribute. According to industry insiders, the minimum limit for Telegram’s ICO has been as high as $20 million for outsiders and $500,000 for “friends”. So far, the Telegram ICO has been offered privately and, in the US, only to professional investors. Telegram is considering advancing ultimately to a public ICO — in which anyone could buy Grams, according to company documents. The company is promising to return money to investors if it fails to create the planned blockchain with a built-in cryptocurrency by late 2019. Although most ICOs raise funding through transfers of bitcoin or ether cryptocurrencies, Telegram is raising funds in traditional, fiat currency, and mostly from classic, not crypto-focused venture investors.

According to a story in Recode, big-name venture firms including Sequoia Capital, Benchmark and Kleiner Perkins Caufield & Byers are participating in the deal. However, Andreessen Horowitz and Union Square Ventures, which made early bets in the crypto space, have taken a pass.

Telegram’s funding differs from conventional ICOs thus far in that only accredited investors who are invited may purchase the discounted coins. This more closely resembles the traditional venture capital form of fundraising where most (if not all) of the discounted tokens are sold off to private investors before the public round opens. However, unlike typical venture deals, investors don’t get a board seat, voting control or shareholder protections, and they hold no equity.

Telegram is best known for a messaging app, which the company claims is used in over 60% of ICO projects. However, the company’s own ICO has ambitions far beyond instant messaging. The company is planning to develop the building blocks for a decentralized internet that could eventually power decentralized apps (known as DApps), smart contacts, censorship-proof websites and more.

The Telegram Open Network (TON) is intended to host and provide a variety of services, including:

If Telegram is successful in developing these various components and integrating them into one usable system, the company could leap from a messaging app to a broader content platform. Telegram’s existing ecosystem will offer simple ways of buying and spending Grams via its Bot Platform and a TON-based ad exchange, allowing for trade in cryptocurrencies, paid promotional advertising, paid content and subscription services, virtual storefronts, and more. Telegram will also offer a searchable registry of available decentralized services, with lists and recommendations, similar to Google Play / App Store.

Rather than using a platform like ethereum for its token sales and services like most ICOs, Telegram wants to create a platform of its own to rival Ethereum for hosting a new wave of decentralized services and internet experiences tipped to emerge thanks to the blockchain.

Choosing an ICO over an IPO has significant benefits, but it brings extensive risk and media attention. If Telegram had run into issues with their ICO, it could have been disastrous for both the company and the crypto community. Therefore, Telegram played it safe. The TON sale is certainly an ICO, but the company has made sure to comply with SEC regulations and has included other measures such as accepting fiat currency payment.

Choosing an ICO has various clear benefits for a startup. Companies have been able to raise exorbitant amounts of money, often very quickly and easily. In addition, many ICOs let company founders keep all of the equity in their company. Telegram CEO Pavel Durov has said he won’t give up control of Telegram to other investors, and the ICO structure lets him raise funds while keeping control.

IPOs give investors stock ownership in a company. Unlike IPOs, ICOs basically provide tokens that their sellers promise will be useful in a new digital network, once it gets built. However, the value of a company itself and the value of the goods or services it provides are generally tied to each other, meaning in each case the value to the investor is tied to the success of the business.

Another advantage of ICOs over IPOs is that prices can be adjusted over the course of the ICO in accordance with changing demand. Telegram reportedly discounted its tokens in the first round of their ICO, and then increased the price for the second round. This is an advantage over IPOs in which a company must make an educated guess and use available information to predict demand, which is why stocks like LinkedIn several years ago saw a near 100% increase in its price during an IPO. It underestimated, and could not adjust.

One issue for people in the startup world is non-liquid equity. Founders or employees of companies hold shares of companies that they cannot sell or benefit from for years, until the company reaches an exit. ICOs have dramatically improved liquidity for companies, letting token holders buy and sell tokens without waiting years for an exit. This solves one of the biggest problems for startup employees. It is also a key reason why ICOs can be seen trading at such inflated market caps.

Finally, ICOs these days offer large amounts of publicity and media attention, which can also benefit a company, especially a B2C company such as Telegram that is reliant on signing up large numbers of individual users.

However, some are skeptical about Telegram’s ICO. “It’s difficult for me to find a convincing argument to why Telegram is going after all this money, and will investors ever see any return from it,” says Alex Buelau, CEO and co-founder of Coinschedule.com, a website that lists upcoming ICOs. “Ethereum raised $20 million and was able to launch and grow into a network of millions of users with a healthy market cap of $80 billion, so why does Telegram need 250 times more money,” he asks.

For the ICO system of funding to take hold, there is a lot of work that still needs to take place. Teams and investors need to have lock-up periods that are legally binding to avoid pump & dump scams and insiders taking advantage of the public. Token sales are a young phenomenon, but are already revolutionizing how startups raise money.

The more successful Telegram’s record-breaking ICO is, the more likely other companies will choose the ICO route for raising funds as well. This ICO may serve as a turning point for the sector. As Pavel Durov initially became wealthy by imitating Facebook with his social media company VKontakte, other messenger apps may copy Durov and follow the crypto route, at least as a means for raising money. Most messaging apps are cash negative. If successful, Telegram could possibly set the stage for similar moves by China’s WeChat and possibly Facebook’s Whatsapp. Many companies in the realm of crypto are interested in following up Telegram’s ICO with similar rounds of their own, but this ICO has made non-crypto companies take note as well.

Others think ICOs may become a competitor to investment banks who help companies with initial public offerings. “Telegram’s ICO is a sign for other well-known companies to issue tokens to raise money instead of doing an IPO,” says Storiqa’s CEO Ruslan Tugushev. “Pavel is showing that even firmly established companies can expand and go global with an ICO.”

Kickstarter proved the idea that people were willing to pre-purchase a product, and now ICOs and TGEs (token generation events) are taking that same idea and applying it to software and services. The more companies raise funds through ICOs, the more the IPO market and stock exchanges will be adversely affected.

Effect of ICOs on Markets

ICOs make funding more accessible. Previously, entrepreneurs have been limited to angel and VC investors. These funding sources are less accessible to some entrepreneurs due to geography, social status, language barriers, and other obstacles. In addition, VCs often take large chunks of equity and can decrease the control entrepreneurs have over their own companies, both in terms of shares and in terms of business direction. Raising money through ICOs erases some of these problems, making it easier for different types of people and companies to raise money and then develop their company as they see fit. This has its advantages in accessibility for entrepreneurs, but also means that with less responsibility to others, they are more free to lag in development or even give up altogether.

Unfortunately, due to poorly written crowdfunding rules (smart contracts) and negligent investors, it is common for funds to be mismanaged post-ICO. Despite the functionality that Ethereum smart contracts offer, almost all the ICOs are structured to allow the founders total control over all the funds post-ICO. Meaning there is a very little financial incentive for the development team to build the actual product. Increased regulation may help negate this. As governments and federal agencies such as the SEC become more familiar with ICOs, regulations are catching up to this fast-developing space.

On the investor side, ICOs are changing markets by allowing a wider pool of investors to participate in funding early stage companies. This may alter the space of investing, with more opportunities for smaller investors and less impact for established, wealthy VC funds. On the other hand, established investors have been displaying a sense of urgency to get in on the impressive returns from ICOs. This may be connected to Telegram’s decision to set minimums of millions of dollars for investors in the first round of their ICO.

Telegram’s ICO may also include signs of a future convergence between ICOs and IPOs. Telegram’s ICO includes minimum investments that prohibit most individual investors from participating, and also accepts investments in fiat currency rather than bitcoin or ethereum. If other large companies follow Telegram in pursuing funding through ICOs but geared towards conventional large investors, and the SEC settles on standard regulations that these ICOs comply with, it may be the beginning of a new era of startup funding.