Today, fiat-to-crypto exchanges are facing the largest overall risks in the cryptocurrency market. More and more banks are banning the exchange to and from fiat currencies, while the more progressive financial institutions are proceeding with caution as more regulators get involved in the market. These regulations vary greatly by country, and we are yet to see a clear stance from most governments and financial institutions concerning the crypto market.

Cryptocurrency exchanges are facing immense institutional challenges, and various platforms are responding differently to the ongoing changes in regulations. While platform competitors, Circle and Coinbase, have successfully worked with regulators and banks, others have chosen to flee to areas with easier regulations, and the most idealistic may be left out to dry by refusing to work with any traditional governing body.

Banks around the world are taking a variety of stances in regard to cryptocurrency exchanges. Many banks and government regulators are refusing cooperation with startups that handle cryptocurrency exchanges, concerned by their perceived links to money laundering and terrorism financing. However, Forbes notes that “banks and technology services companies are realizing the real potential of both cryptocurrencies and the underlying distributed ledger technology behind them as important assets for their organization.” As cryptocurrencies continue to gain a legal and normative status, we might see banks follow suit, and embrace the industry.

In late 2017, Russia decided to block all access to cryptocurrency exchange platforms. Instead, Russia is working to develop and release their own in-house cryptocurrency, the “cryptoruble,” a state-controlled cryptocurrency as a possible way to evade western economic sanctions and track its own population.

China has taken an overall tough stance against cryptocurrencies, banning ICOs and cryptocurrency exchanges. They have also targeted platforms that allow domestic trades on overseas venues.

While many banks are shunning the cryptocurrency world, some banks are embracing the future of the cryptocurrency exchange market. For example, Coinbase recently forged a relationship with Barclays, the first deal of its kind in the United Kingdom. Prior to the partnership, Coinbase’s UK customers would process their crypto transactions through LHV, an Estonian bank.

The United States is supporting cryptocurrency innovations, with key politicians urging an embrace of new crypto technologies. The Congressional Blockchain Caucus (CBC), was launched last year in order to support the cryptocurrency industry and its interests. While generally supportive of cryptocurrency companies and startups, the US is actively working to crack down on bad actors and illegal activity in the field.

Goldman Sachs, an American Bank and major investor of Circle, a cryptocurrency exchange platform, is exploring the option to set up a cryptocurrency trading desk, perhaps after a deeper understanding from its investment as to where the fintech market is heading. Business Insider notes, that Goldman Sachs would be the first major US bank to open a crypto desk. A Goldman spokeswoman told Business Insider, “In response to client interest in various digital products, we are exploring how best to serve them in the space. At this point, we have not reached a conclusion on the scope of our digital asset offering.”

Invest In Blockchain claims that, “investing in platforms is the safest and potentially most lucrative sector of digital assets in 2018” noting that platforms have an attractive balance of risk vs reward and that institutional money is heavily focused in this field. Cryptocurrencies and their platforms are increasingly viewed as a threat to banking business models and may cause banks to lose clients. CCN reported, “JPMorgan and Bank of America each warned that cryptocurrency could prove to be a disruptive technology that reduces the need for third-party intermediaries, like banks.” Many of the US credit-card issuers are striking back and have stopped permitting the purchase of cryptocurrencies on their credit cards, making it more difficult for individuals to buy into the market.

Not all banks have had this anti-crypto reaction; Goldman Sachs and Morgan Stanley are clearing bitcoin futures for some clients and both firms are looking to hire cryptocurrency experts to improve their investment strategies. Despite its negative messaging toward the industry, JP Morgan Chase is also investing in blockchain technology by developing a blockchain-powered platform known as Quorum.

Just as banks are warming to the cryptocurrency industry, some cryptocurrency exchange leaders are categorically working to promote a healthy relationship with the traditional fintech industry and its regulators. Circle, a fintech company backed by Goldman Sachs, has been very diligent in working with regulators, and was awarded a BitLicense, a certification for virtual currency businesses issued by the New York State Department of Financial Services and earned an electronic money license from the UK’s Financial Conduct Authority. The company’s CEO also advises the International Monetary Fund on fintech policy.

Circle, who recently acquired Poloniex, one of the world’s largest cryptocurrency exchange platforms, has a long term goal of becoming an alternative to the existing financial bank structure. With the company’s new influx of Poloniex’s customers, high revenue and mainstream investors, Fortune predicts that the company has “a legitimate chance at building the bank of the next century around crypto-finance.”

While there is no publicly disclosed valuation for Circle, AI-assisted business intelligence firm Zirra places Circle’s current valuation between $900 million and $1 billion. The exchange platform allows users to purchase and invest tokens on the platform that are consistent with the company’s regulatory licensure and currently offers bitcoin, bitcoin cash, ethereum, ethereum classic, litecoin and zcash as of this month. Circle allows its users make fiat deposits and withdrawals in addition to cryptocurrency exchanges. They also offer zero-commission trading, which sets it apart from competitors.

Bitpanda, an Austrian cryptocurrency platform, is also keeping itself close to local government institutions, and in July 2017, entered into an agreement with Austria’s state-owned postal service and recently formalized research deals with the Austrian Academy of Sciences and Technical University of Vienna. The platform is keeping an overall positive attitude towards regulation policy. Bitpanda’s CEO Eric Demuth said, “Regulation provides us with more legitimacy. We’ve wanted to be regulated, but so far have been told that we cannot be”. 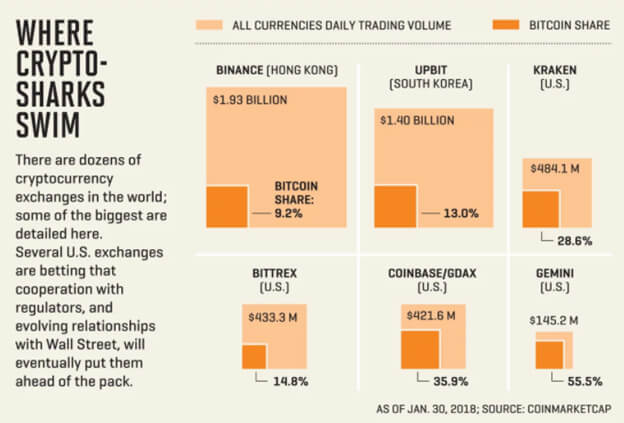 Conversely, when platforms are not proactive in meeting the criteria of governing bodies, regulations can quickly threaten cryptocurrency exchanges. In April 2018, Kraken announced it is pulling out of Japan amidst increasing oversights by Japanese regulators. And in March 2018, Binance was issued a warning by Japanese regulators, despite its ongoing efforts to secure a license. The sharp rise in regulations follow a $500 million hack of Coincheck, one of Japan’s domestic exchanges, in early 2018.

As international governments and their regulations catch up with the quickly evolving cryptocurrency market, the platforms are forced to play ball or move on to more progressive legislating bodies. Companies like Binance, one of the world’s largest cryptocurrency exchanges, is expanding into countries with more relaxed policies. The company announced a move to Malta to start a fiat-to-crypto exchange, and is reportedly close to securing a deal with local banks that will give access to deposits and withdrawals.

Cryptocurrencies have created a large list of concerns for government bodies including illegal ICOs, tax evasion, money laundering and more. In response, countries around the world have been attempting to crack down on cryptocurrency exchanges, making it difficult for some platforms to find a permanent base.

Various exchange platforms are choosing different paths to deal with this sensitive pain point. Some cryptocurrency exchange platforms look to work with regulators, while others move to locations with more favorable and relaxed policies. Those platforms that are resisting any regulation, may lose out on market penetration, making room for more cautious players.

All in all, it appears that the market will continue to thrive, perhaps at a more stable rate, as more traditional institutions stop fighting the industry and embrace it instead. Circle is certainly one of the exchange platforms destined to prosper as it aids in this regulatory cooperation. Due to this strategic planning for long-term success, more and more investors are looking to back the company through The Elephant Platform. Those cryptocurrency platforms who avoid cooperation with governmental and financial institutions may be left behind.