As Initial Coin Offerings (ICOs) take the world of finance and investment by storm, there are now over 1,500 different digital tokens available. These range from cryptocurrency Bitcoin, to IOTA, a token that aims to facilitate transactions between devices on the Internet of Things (IoT), to PizzaCoin, a token dedicated to ordering pizza. As this market continues to grow, it is worth taking a look at the various types of tokens.

According to a report from Fabric Ventures and TokenData, ICOs raised over $5.6 billion in 2017. This compares to $1 billion of ‘traditional’ venture investing in blockchain startups in the same time frame. In 2016 $240 million was raised in ICOs. 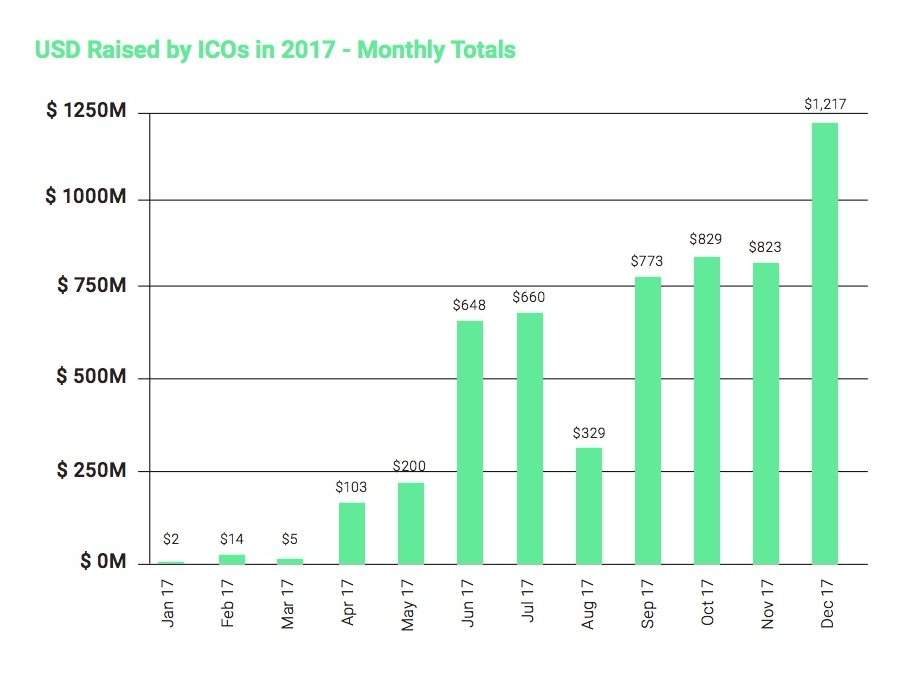 Tokens are generally broken down into either utility tokens or security tokens. Utility tokens, often called app coins or user tokens, represent access to a company’s product or service. One example comes from camera company Kodak’s KODAKCoin blockchain, which aims to let photographers license and sell their photographs online. Some have described utility tokens as comparable to API keys, used to access a service.

The other main type of token is security tokens, which enable purchasers to own an asset (such as coins redeemable for precious metals or tokens backed by real estate) without taking possession of the asset. Security tokens represent assets with real value, such as physical goods, credit, futures, and more. One of the main applications of security tokens is that they grant companies the ability to issue tokens that represent shares of company stock.

In the United States, securities are subject to SEC securities regulations. As described by Marco Santori, President & Chief Legal Officer at Blockchain, an arrangement is a security if it involves “an investment of money…and a common enterprise…with the expectation of profit, primarily from the efforts of others.” On the other hand, utility tokens are not designed as investments, and as a result are generally exempted from regulation and security laws. The large majority of tokens to date are utility tokens, but many utility coins are currently in a gray area where regulators may consider them to be securities due to their perception as investment opportunities, even if that is not their official intended function. One result of this situation is that many projects have simply avoided offering participation to US investors. 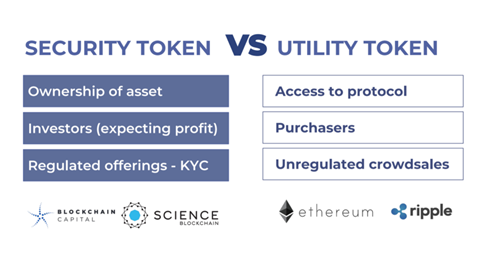 Security tokens aim to improve traditional financial products by removing the middleman from investment transactions, allowing users to more directly buy and sell assets. This can lead to lower transaction fees, faster transfers, decentralization, and more access for everyday individuals to invest rather than just financial institutions. Because security tokens are subject to federal securities regulations, they are legally compliant from the beginning.

While most tokens currently available are utility tokens, many leading experts believe that this may shift soon, as the market develops and Wall Street invests in security coins. Until recently, many blockchain startups have focused on utility tokens in order to avoid dealing with SEC rules and regulations. There is no regulation of utility tokens, making this a much more attractive strategy for companies thus far. Companies launching utility tokens can avoid costs involved with regulatory compliance and can pursue non-accredited investors. In addition, cryptocurrency exchanges have thus far disallowed security tokens from being traded on their platforms in order to avoid getting bogged down in legal complications and regulations themselves.

Thus far in 2018 the value of cryptocurrencies has nosedived, dropping from a total market cap for all cryptocurrencies of $815 billion in early January down to a total market cap of $330 billion in March 2018. Amidst uncertainty in the field, the number and value of ICOs has also receded. According to Globes, there were 175 ICOs in January 2018, and 197 in February, but March 2018 has only expected 180 ICOs. The sum of money raised in ICOs in March is expected to be the lowest since August 2017. The drop in ICOs may be attributed both to market conditions as well as companies watching out for the SEC.

An increasing number of companies have worked on ICOs involving security tokens:

Other ICOs listed with a real-estate component include:

As a result of the lack of platforms to trade security tokens, one of the main obstacles preventing security tokens from picking up steam has been a lack of places to trade them. However, this situation is evolving quickly. Several new platforms are being launched in 2018 that will help security tokens launch with full regulatory compliance, including KYC (Know Your Customer) and AML (Anti-Money Laundering) compliance. In addition, several security token exchange platforms are launching in 2018. Templum claims to have executed the first security token trade in a fully compliant platform, and Overstock.com also says it is building an SEC-compliant digital assets exchange through its subsidiary tZero. Another company, Polymath, simplifies the legal process of creating and selling security tokens by creating a new token standard, the ST20, and enforcing government compliance. In order to launch a legally compliant token, the Polymath platform brings together issuers, legal delegates, smart contract developers, KYC verification, and a decentralized exchange. All transactions on the Polymath platform take place using the native POLY token. According to Polymath CEO Trevor Koverko, in 2018 Corl Financial Technologies, Inc. (Corl), Ethereum Capital, and SeriesX, plan to each have securities tokens generated on the Polymath platform.

In February 2018, Goldman-backed Circle acquired US cryptocurrency exchange Poloniex. In a statement, the company said they envisioned developing the exchange into a place for more than just crypto assets, but rather “a robust multi-sided distributed marketplace that can host tokens which represent everything of value: physical goods, fundraising and equity, real estate, creative productions such as works of art, music and literature, service leases and time-based rentals, credit, futures, and more”.

Issuing a compliant security token can reduce legal risk and provide protection for both the company and the contributors — especially since the SEC has increased their enforcement initiatives. The SEC has begun declaring many tokens issued in ICOs to be securities, even if they are not announced as such by those creating the tokens.

In July 2017, the SEC issued a report after investigating tokens offered and sold by a group running a crypto VC fund called the Decentralized Autonomous Organization (the DAO). The SEC found that the DAO’s tokens were securities and subject to federal securities laws, and that the tokens in such ICOs would need to be registered with the SEC unless a valid exemption applies to the offer and sale of the tokens. In December 2017, the SEC issued another enforcement action after investigating another token offering that claimed not to be a security but emphasized in its advertising that investors could expect their tokens to increase in value and be eventually resold. The SEC ruled that these tokens were also securities. The SEC’s cracking down on ICOs and enforcing securities regulations has led to some ICOs avoiding the United States but is causing others to attempt to comply with securities laws and benefit from being in line with federal regulations.

By using blockchain tokens to make entire asset classes liquid and tradable, traditional investors such as hedge funds may be enticed to enter the world of crypto. Typical VCs will realize the advantages of not being locked into their investments for up to a decade before realizing any profit. At the same time, smaller qualified investors and individuals or crypto investors will enjoy being able to invest in a variety of asset classes typically accessible only to large investors (such as real estate, equity, and artwork), increasing their ROI and diversifying their portfolios. People who got into investing through the world of crypto will prefer tokenized equities over different investing methods involving fiat currency or even actually buying properties.

Scott Hoch, an analyst at Apex Token Fund explained, “A new level of liquidity is created when tokenizing traditional assets. This liquidity makes it faster and easier to rebalance a portfolio as the market changes.”

Many changes are afoot in the world of cryptocurrency. In January 2018 The United States stepped up its efforts to crack down on initial coin offerings (ICOs) by freezing the assets of AriseCoin, which raised over $600 million in an ICO. This represents the first time that the US government has seized the assets of an ICO it believes to be fraudulent. Facebook, Google, and Twitter have all recently banned cryptocurrency ads. The IRS has ruled that bitcoin and other cryptocurrencies are viewed as property, and not currency, for tax purposes. Leading stock investing app Robinhood has announced the addition of cryptocurrency trading to their app, which is used by four million investors with an average age of 28 to invest in the stock market. The increase in regulation, crackdown on ads and fraud, and additions of new ways to access and trade cryptocurrencies are all signs of a new phase in cryptocurrency.

Thus far, the fledgling cryptocurrency market has mostly avoided regulation and dwelt in gray areas regarding taxation, compliance, and other legal matters. As the space evolves and matures, it is becoming less of a niche alternative for outsiders. Institutional investors are expected to become increasingly involved, governments are making decisions about how to treat tokens, and financial institutions are beginning to adapt. The increase in platforms and companies related to security tokens is one sure sign that this market is on the rise, and 2018 may be the turning point.